Things are getting dire here. Egg supplies are at an all time low. Days of overcast skies and hours spent huddling out of the rain under the hen palace have led to a complete halt on the egg production line*. I do wonder if Agnes and Mrs P have gone off the lay in protest at Lola’s continued egg theft. If so, it’s working a treat. She’s completely given up on pretending to be broody and is out and about and back to her old routine of getting herself covered in mud a mere ten minutes after she gets up in the morning and spending the rest of the day trying to fluff herself clean. Betty’s vigilant guard over her eggs in the broody house continues. With every day she is tolerant of less time spent away from them. Today she was warbling and pacing after a mere ten minute leg-stretch. By the poultry man’s (PM) calculations her chicks will be pecking their way out to freedom in three day’s time. One of my poultry books gives dire warning about the potential for her long fine feathers to strangle the young chicks, but the PM feels these fears are unwarranted. Despite having never met her, he has been strangely fascinated with progress reports on her brooding and asserts complete confidence in her abilities. Hopefully he’ll be as fascinated with any rooster-chicks that eventuate and kindly rehouse them before our neighbours decide they want us rehoused.

With the possibility of no new eggs by the weekend, I am hoarding the remaining five for a cake to celebrate the return from traveling of best lawyer friend (the BLF). Which last night left me with the dilemma of eggless pudding. Some might blithely say ‘just skip pudding’, like pudding is optional. It is a rare day indeed that pudding would be optional for me. A day that ends without dessert feels incomplete and leaves me inconveniently preoccupied with thoughts of breakfast and how far away it is. Happily, the Two Fat Ladies filled the void. 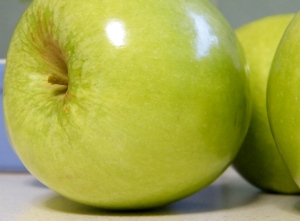 The Two Fat Ladies’ introduction to this recipe is written as follows:

“I remember, as a teenager, hearing this song on the American Forces Network and always thought it sounded very jolly:

Makes your eyes light up

And your tummy say “Howdy!”‘

So I thought we should include the pandowdy in our apple feast.”

As I read this, I can hear Clarissa Dickson Wright’s plummy English accent so clearly in my head. The enthusiasm that she and Jennifer Paterson had for food was utterly infectious and comes across in the written word almost as well as on the screen – they just loved their food unreservedly. I feel they would definitely approve of a household where you can count on pudding being available seven days a week.

2 tablespoons of golden syrup (I didn’t have any, so I substituted treacle with excellent results)

Butter a 1 litre baking dish. Mine is quite broad and shallow, leading to a crispier topped pudding. A deeper dish will yield a deeper, fluffier pudding section. 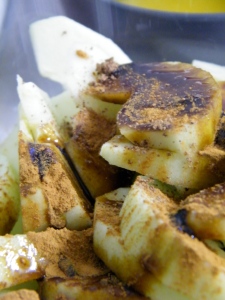 Peel, quarter and core the apples. Thinly slice them into a bowl. Add the syrup/treacle, cinnamon and nutmeg, then toss gently to coat all the apple pieces evenly. Spoon the apple into the bottom of your prepared baking dish.

Sift the flour, salt and baking powder into a bowl and stir in the sugar. Make a well in the centre and add the milk and melted butter. Stir to make a smooth batter, then spread evenly over the apple slices.

Bake for 35-40 minutes. It is ready when the sponge has risen and browned and the apples beneath are softened. Serve from the dish or invert onto a serving dish (I wouldn’t do this unless you know it’s all going to be eaten in one sitting, as the sponge will get soggy).

Served hot, generously accompanied by cream or ice-cream and a big hot mug of tea, it’s a perfect end to a cold and drizzly day. The very top has a satisfying crunch. Beneath that is a layer of softer sponge and lurking beneath that is the apple – soft, spicy and sweet. Tummies all around will definitely say ‘Howdy!’.

*According to the PM, a hen needs at least 12 hours of light to conceive an egg, explaining why egg supplies can be low for the backyard hen in winter. This was quite a revelation. I always assumed they just weren’t happy to get their nether parts chilly.

2 Responses to “Let the sun shine”