All of you television-watchers out there will know that there is a lot of air-time dedicated to examining the medical world. Comedies, dramas, documentaries, reality shows, shows about hospitals, celebrating ‘hero’ doctors, following ‘brave’ patients along their ‘journey’ (eye-roll hard here at reality tv having so comprehensively ruined one word), behind-the-scenes looks at complex medical procedures, fly-on-the-wall surgical delights, ambos, surgeons, GPs, oncologists, possibly even the cleaners will have their own show soon. I remember one year back in the nineties when there were about eight on in any week: Chicago Hope, ER, even A Country Practice was still running.

Once I became a midwifery student I started to long for the day that someone would make a show about birth centres, or maternity wards, or midwives. Now I’d rather they didn’t. Now I dread seeing how birth will be depicted on the small screen. I stopped watching Packed to the Rafters to avoid seeing the birth of the tiniest Rafter. Knowing that Asher Keddie’s character in Offspring is an obstetrician puts me off ever starting to watch it. Seeing bad, dramatic, gory and laughable births on everything from All Saints to Triple Zero Heroes, to reruns of Nine Months used to make me furious, indignant. Now I just find it depressing. I’d rather stick pins in my eye than see one more actor peer under a sheet in the general direction of a labouring woman’s inner thigh and shout “she’s fully dilated!” in the same tone that someone would shout “shark!” in the surf. Occasionally this phenomenon is excused by the claim that it is only worth showing dramatic emergencies, as who wants to watch things go to plan? I understand this query in relation to, say, home renovation. Woman successfully tiles laundry splashback in time and under budget. Man’s plastering effort remains adhered to wall. Compelling stuff. But even normal birth is spectacular. The main difference being that the birthing woman is the hero of the story. Maybe that’s the problem.

One Born Every Minute, screening on SBS on a Tuesday night, has not reignited my love affair with the idea of televised midwifery.

“Every minute of every day a baby is born in Britain. One Born Every Minute is an eight-part series that celebrates what it really feels like to become a parent, by taking a bustling maternity hospital and filling it with 40 cameras. Filming from the reception desk and neo-natal ward to the operating theatre and birthing pool, this groundbreaking new series observes the dramatic, emotional and often funny moments that go hand in hand with bringing a new being into the world, from the perspective of the soon-to-be parents and family, as well as the hospital staff”.

Frankly, I found watching OBEM brought up the same feelings as being at work on a crappy shift. No thrill of watching people stumble over the threshold of parenthood, no spark of empathy for the midwives, no secret wish to go and work in the stark Southampton hospital. The women seem scared, the families are about as supportive as a bad strapless bra, the midwives are bossy and threatening and even the ward clerk is stroppy.

Carolyn Hastie at Thinkbirth has also written about her disappointment with OBEM. I absolutely agree with her contention that this show serves to reinforce every negative stereotype surrounding labour and birth. However, she is bothered by the documentary proposing that the maternity care shown is normal. This is where I disagree. As much as it pains me to say, this is pretty damn normal. As I write this I have no doubt that in a birth suite not far from here a woman will be being bullied, ignored, threatened, starved, unnecessarily connected to a machine, separated from her baby without her consent, infantilised, and she’ll be apologising for it. As midwives (and obstetricians) we might know better but it doesn’t mean we always do better. There are exceptions of course. There are some fantastic people caring for birthing women, but they’re outnumbered by the bored, disaffected, burnt out, fearful and underskilled.

What you see on One Born Every Minute shouldn’t be the norm, but all too often it is. In our maternity care system the quality of care you receive is a game of chance. That is, unless you are in the know and have the guts to speak up, loudly and repeatedly, to ask for the care you deserve. If you are pregnant or considering having a baby get in the know. Read, ask questions, seek multiple opinions and never assume that the professionals will always act in your best interest.

I am a midwife. It is 2010. I work for a large public hospital. To be specific, I am employed by the hospital. Like most of my midwifery colleagues in the hospital system, I work with many different medical professionals, obstetricians, GP-Obstetricians, paediatricians, anaesthetists, endocrinologists and so on. Some I like, some I don’t, some I have great respect for, professionally, and some I emphatically do not. I do not work for any of them. To reiterate, I am not employed by an obstetrician. Midwives, by and large, do not work for obstetricians. I know I’m being heavy-handed here, but we are employed by hospital management. We go to work for professional fulfillment, to earn a living, to care for the women and their families, and to care for their babies. It has been several decades now since we have gone to work to be subservient handmaidens to the obstetric staff. 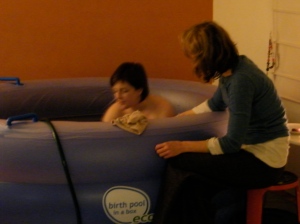 Oh I could go on and on in this vein…we are health professionals in our own right, we can be autonomous practitioners, we have professional codes of practice and ethics, we undergo years of study and supervised practice, we are held to a high standard and undergo professional appraisal every year. We don’t just get to show up, hold a woman’s hand, wrap the baby in a clean blanket, make her a nice cup of tea and empty the bins afterwards. We don’t get to do this job because we’re all so bloody nice. Culturally, socially, there is a commonly heard suggestion: ‘oh, she’s such a nice girl and she really loves babies, she’d be an excellent midwife’. Well that’s crap. Some of us are nice and some of us aren’t very nice at all, but most of us are damn good at the job. Obstetricians, well do I even need to say it? No one cares if they’re men or women (but mention a male midwife and you might as well have three heads), or if they’re ‘nice’, or even if they’re particularly experienced (yet I cannot count how many times I’ve been asked how many babies I’ve delivered – one, my own, the others I’ve caught as their mothers have brought them into the world). And somehow everyone assumes that they’re our employers.

Well they might not have to strain themselves to think differently for much longer. Despite the Government stating, in March, “there is no intention to provide a right of veto over another health professional’s practice” that is exactly what they have done. While they’re proudly advertising their great health reforms of increasing options for women by allowing midwives access to pharmaceutical prescribing rights and Medicare rebates, they’ve carefully put a considerable hurdle in front of any privately practicing midwife who tries to make this happen. Any midwife who wants these rights must not just show that they are collaborating with an obstetrician, but have their practice endorsed by said obstetrician. The first analogy that springs to mind is that of dentists and orthodontists. You go to a dentist for normal tooth care and then get sent off to the orthodontist when things are a little more complicated. No-one is suggesting that orthodontists get a say over whether or not dentists can set up shop.

I’m all for collaboration, for standards, for guidelines, for safeguards, for accountability. I’m not for my colleagues from another profession having a say over how I get to practice. We have a regulating body for that already. And I doubt that they’d appreciate the reverse, if each private obstetrician had to get a midwife’s endorsement (oh, the hilarity – ‘Dr X? He’s lovely but he does routinely cut episiotomies on every first time mother’. ‘Dr Y? Not a great bedside manner and tends to suggest formula feeding in case the baby sucks to hard on the mother’s nipples’). Fortunately we all get a say over whether politicians get to keep their jobs.